Autoimmune hepatitis is a chronic and long-lasting disease in which the cells of the liver are attacked by the immune system that causes inflammation and leads to liver damage. It is generally a progressive disease which occurs in children and adults of all ages. An autoimmune disorder is classified into several types. Type 1 autoimmune disorder can occur at any age, but mostly it begins in adolescence or young adulthood. Also, females are more likely to be diagnosed with autoimmune hepatitis as compared to men. 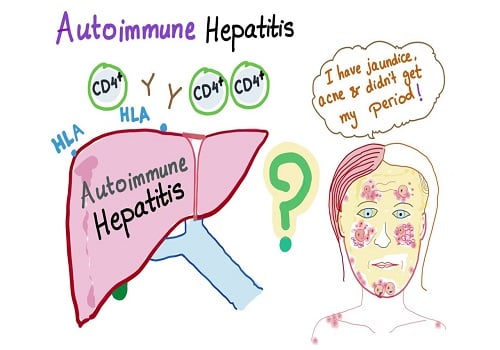 This type of disorder is also associated with various complications, and most of the people who suffer from autoimmune diseases are also likely to have the following disorders:

Celiac disease is a chronic autoimmune disease, and it is a result of the immune system’s reaction to the ingestion of gluten in an individual. This disease is also known as celiac sprue, nontropical sprue, and gluten-sensitive enteropathy. The symptoms of this disease are triggered by gluten, a protein which is found in wheat, rye, and barley. Celiac disease is one of the common cause of chronic malabsorption, and it results from an injury to the small intestine with reduction of digestive enzyme and impaired absorption of micronutrients such as iron, folic acid, and vitamins.

Crohn’s disease belongs to the inflammatory bowel disease, and it is a chronic inflammatory condition of the gastrointestinal tract. It is a relapsing and remitting disease, and under this condition, an inflammation extends through the intestinal wall from mucosa to serosa. Patients with Crohn’s disease experience various symptoms such as diarrhea, crampy abdominal pain, nausea, fever, loss of appetite, weight loss, tiredness, and sometimes rectal bleeding.

Grave’s disease is also known as toxic diffuse goiter, and it is characterized by hyperthyroidism, ophthalmopathy, and pretibial myxedema. In the United States, Grave’s disease is one of the common cause of hyperthyroidism. It is an autoimmune disorder in which the immune system makes an antibody which is known as thyroid-stimulating immunoglobulin. It is attached to thyroid cells and stimulates the thyroid to produce too much thyroid hormone. People with Grave’s disease may have common symptoms of hyperthyroidism such as irritability, nervousness, trouble sleeping, irregular heartbeat, frequent bowel movements, and weight loss.

Hashimoto’s disease is one of the most common causes of hypothyroidism as it is an autoimmune disease that damages the thyroid gland. It is an inherited condition that affects millions of people, and as per the researchers, it is seven times more likely to attack women as compared to men. Hashimoto’s disease is defined as a condition in which the body’s immune system produces antibodies that damage the thyroid cells and impairs its ability to make thyroid hormone. The immune system of the body mistakenly consider healthy cells of the thyroid gland as a foreign invader and produces antibodies that lead to the destruction of the cells. People who suffer from this autoimmune disorder are more likely to experience symptoms like drowsiness, weight gain, sore muscles, constipation, heavy menstrual cycle, and extreme tiredness.

Primary Sclerosing Cholangitis is a serious and chronic cholestatic liver and biliary tract disease. It is a severe disorder and has various complications associated with it, and it mostly results in fibrosis and strictures. It is a condition which is characterized by the presence of breading and stricture formation of the intra and extrahepatic bile ducts. Also, there a large number of people suffering from primary sclerosing cholangitis experiences an underlying inflammatory bowel disease, such as Crohn’s disease and Ulcerative Colitis. Most of the time, patients do not develop any symptom, but sometimes they develop symptoms like right upper quadrant abdominal pain, fever, chills, weight loss, and extreme tiredness.

Rheumatoid Arthritis is a chronic autoimmune disease which causes pain and inflammation of the joints. The immune system of the patient having this disease target the lining of the joints and leads to joint damage. Usually, smaller joints such as joints of hands and feet are attacked, but it can also attack other joints such as the joints of the hips and knees. In some cases, it can lead to permanent joint damage, and in severe cases, with progression, it can lead to deformity of joints and impaired function. Other than inflammation, symptoms of rheumatoid arthritis include joint pain, tenderness to touch, stiffness in the joints, irritability, anemia, weight loss, and inflammation in the eyes and other parts of the body. It is a serious condition that affects a large number of people and adversely affects the quality of life of the sufferers as it can make it difficult for a person to perform regular activities.