Sweating is essential for temperature regulation. In humans, sweat glands play a vital role and these exocrine glands are found under the skin and are used for regulation of body temperature. There are three types of sweat gland: eccrine, apocrine and apoeccrine. It is the eccrine sweat gland which is responsible for thermoregulation and the other two glands generally produce secretions which are rich in proteins, salt, and fats which evaporates a slower rate as compared to eccrine secretions and therefore reduces the rate of heat loss. The secretory portion of the eccrine sweat gland secretes isotonic fluid into the lumen. The secretion of isotonic fluid involves a few stages. It begins by releasing acetylcholine from periglandular cholinergic nerve ending and then it binds it to cholinergic receptors which are located in the basolateral membrane of the cells of the secretory coil. This activation of cholinergic receptors leads to the mobilization of intracellular calcium and the influx of extracellular calcium into the cytoplasm. This further results in the secretion of sweat. 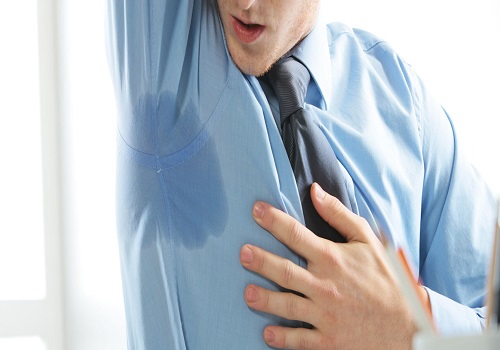 Sweating is a normal process but some people suffer from excessive sweating and in medical terms, this condition is known as hyperhidrosis. Hyperhidrosis is a chronic autonomic disorder that affects the entire body but it primarily affects face, armpits, palms, and soles of the feet. Hyperhidrosis is characterized by the visible sweat, wet cloth and a clammy handshake and this condition can lead to an emotional and social embarrassment.

Obesity is a chronic disease which contributes to the development of various other health conditions. Excessive sweating is one of the symptoms that an obese person mostly experiences. When the consumption of nutrient poor food and a high level of sugar and saturated fats are combined with no or reduced physical activity, it causes obesity. It is defined as the accumulation of fat in the human body beyond the amount that is required by the body to function normally.

Obesity has become a serious health problem around the world and studies suggest that several biological mechanisms are responsible for its adverse health effects. Body mass index or BMI is the most common screening measure that is used to determine whether a person is overweight or an obese.

Also Read: Have you heard about Schizophrenia?

Most often, it develops slowly and include symptoms such as difficulty in concentrating, frequent feeling of irritation, and excessive sweating due to excessive worry. The symptoms often get worse at the time of stress and they can get better or worse at different times.

Diabetes mellitus is a disorder that is characterized by the excessive blood sugar level due to body’s inability to produce enough insulin or the body’s inability to efficiently use the produced insulin. Excessive sweating is the cardinal symptom of diabetes mellitus and the primary reason is its correlation with other other health conditions that cause sweating. Worldwide, the incidence and prevalence of diabetes are increasing rapidly in both adults and children. In the developing countries, lifestyle factors are the major risk factors in the development of diabetes mellitus.

Hyperthyroidism is a common disorder which occurs when the thyroid gland makes the thyroid hormone in excess. This disorder is more common in females as compared to the males and it is often accompanied by an irregular heartbeat, trembling hands, irritation, muscle weakness, loss of scalp hair and excessive sweating. Numerous studies suggest that most of the patients with hyperthyroidism have heat intolerance and sweating. Thyroid hormone plays a significant role and is responsible for various body processes. Primarily, it plays a vital role in metabolism and any alterations in the level of hormones affect the functioning of the entire body. Generally, hypothyroidism grows slowly but in some patients, the changes can be very fast.

Sweating is a normal process in the but an excessive sweat is linked to an underlying condition. It is essential to differentiate between the conditions. Share this post with your family and friends and aware them about excessive sweating. .