Some Foods That Enhances Mood

Depressed mood, stress, and anxiety are the terms that have become very common and well-known terms and has a major impact on the quality of life of an individual. In modern society, stress is very common and it is often accompanied by changes in mood.

The mood is defined as mental status of thinking. Moods such as feeling cheerful or depressed are states of mind and it is associated with one’s thought and pervade one’s reflection. The mood is a complex mental situation which fluctuates from time to time and it depends on various factors such as peripheral and biological factors. Food is another factor that as an impact on the mood as there are certain foods that are known to enhance the mood. Certain food items release neurotransmitter in the brain and it also relieves stress which is often associated with low or depressed mood. 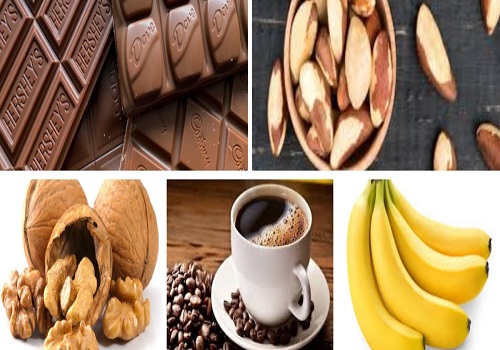 You must have heard or experienced that the consumption of chocolate is often associated with an increase in happiness. It is commonly claimed that chocolate has the capability to make people feel good and it can be due to its properties of being a stimulant, relaxant, aphrodisiac, tonic, and antidepressant. Chocolate interacts with various neurotransmitter systems such as dopamine, serotonin, and endorphins that have an impact on mood regulation.

Also Read: How to Get Clear Skin With Tomatoes

The major psychoactive components of chocolates are flavonols and methylxanthines which have an effect on behavior and cognitive functions. These phytochemicals improve alertness and psychomotor functions.  Also, chocolate contains a different number of ingredients that have a positive effect on the mood and cognitive function, such as carbohydrates. Carbohydrates are known to have a behavioral effect and it also has glucose which has an effect on the cognition. Chocolate has a high rating due to its appealing sensory characteristics. There is some evidence that suggests that chocolate can be considered as of the food item that is beneficial for patients suffering from depression due to the effect of chocolate on the mood of an individual.

Brazil nuts are well-known nuts that contain many nutritional properties such as antioxidant property, vitamin E and it is due to high selenium content. Brazil nuts are considered to be the richest dietary source of selenium and selenium has various health benefits and its benefits are seen on almost the entire human body, including the brain. Selenium is an important substance to the brain and multiple studies have suggested that people with a low level of selenium in the body is often found to be suffering from depression.

Selenium acts as a mood enhancer. Along with with the mood-enhancing the effect of selenium, it affects the mood due to its role in maintaining oxidative stress, and the functioning of the central nervous system. Selenium also has a modulatory effect on the metabolism of the body which influences the susceptibility of an individual to develop depressive symptoms such as bad mood. A persistent or frequent bad mood is the initial stage of depression and selenium enhances the mood and reduces the risk of developing depression.

According to the survey, many people agree that consumption of banana is linked with an improved mood and cognitive function and it is because banana is known to contain tryptophan, a type of protein which helps an individual to relax, improve their mood and make them happy. Tryptophan is an essential amino acid and is a sole precursor of peripherally and centrally produced serotonin. Serotonin synthesis occurs centrally within the neurons of the raphe in the brain stem and serotonin is known to play an important role in influencing the mood.

Along with the mood-enhancing effect, serotonin also plays a role in behaviors that are associated with high cognitive demand. The receptor of serotonin is often found in the brain regions that are involved in learning and memory. When the parts of the brain function normally, the mood of an individual is also normal. Fluctuations in the mood of an individual involve various process that takes place in the brain.

A large number of studies have shown that the consumption of coffee leads to an increase in alertness and has a positive effect on the mood of an individual and it is primarily due to the caffeine which is one of the main ingredients in coffee. Caffeine is considered to be one of the world’s frequent ingested psychoactive substance and psychoactive substance are found to have mood enhancer properties.

According to one of the studies conducted to investigate about the effect of caffeine on the mood, it was observed that the people felt a change in their mood and behavior after the consumption of coffee. In fact, certain studies also suggested that caffeine can be used as an ingredient which is effective in improving the symptoms of depression. Change is often witnessed by people after the consumption of coffee. Along with caffeine, coffee has other substances as well which have mood-enhancing the effect.

Walnuts are known for their nutritional properties and are commonly found in the diet. Walnuts are the nuts that contain omega fatty acid in one of the highest amount and in addition to essential fatty acids, walnuts contain a variety of other bioactive compounds such as, vitamin E and polyphenols. Multiple studies have proved that walnuts have a mood-enhancing effect and an increased amount of omega 3 fatty acid is one of the reasons for its effect on mood. There is a positive correlation between the consumption of walnut and an enhanced mood. Walnuts are also known to have an effect on stress and consumption of walnut can lead to a reduction in stress and there is no doubt in saying that stress is often accompanied by a bad mood.