A rare genetic condition that causes a person to age prematurely is termed as Progeria. It is also called as Hutchinson-Gilford Progeria. It causes a child’s body grow fast. Most of the kids do not live past the age of 13 because of the presence of atherosclerosis. They do appear healthy but by the age of 2, they look like an old person. They affect both the genders equally. 1 in every 4 million birth is affected by this medical condition. A single mistake in the genes could cause this condition. It is actually a rare combination of dwarfism as well as premature aging. It can not be passed down in families. In this, actually a kid will look normal during the birth, but as time will pass by, the symptoms will start becoming visible. 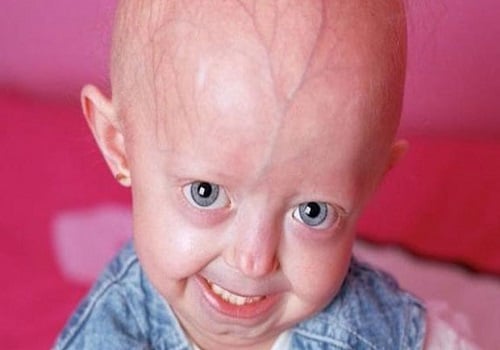 There are some early signs associated with progeria which are:

These signs are initially visible within 1 year of a child’s growth. As they get older, you would see them getting diseases that usually 50 years old people get. Though it doesn’t affect a person’s intelligence and reasoning ability, it does hamper the growth of the body.

What exactly are the causes?

Progeria is actually a genetic condition. It has a mutation in the gene that encodes for lamin A. It is a protein that is responsible for holding the nucleus altogether. This protein is referred to as progerin which increases the instability causing cells to die younger leading to the symptoms. Children with this medical condition often die of heart attack or strokes.

It could be diagnosed by the noticeable symptoms. If you see some irregular appearances in your child, you should immediately consult the doctor. Some examinations like a physical exam, test hearing, and vision, blood pressure test etc are done in order to have a complete analysis of the body.

There is no cure till now. It can only help a child keep moving if his joints have gone stiff. Researchers are in the process of finding a cure. Some medications could be prescribed by the doctor to prevent heart attack or strokes. Growth hormone can also build height as well as weight.

Some children may undergo surgery to slow down the progression of heart-related diseases. Kids who have progeria usually get dehydrated, so they need to drink sufficient amount of water.

This is all about Progeria. Read the article and share the awareness about this rare genetic condition. Stay Safe Stay Healthy