Complete Guide To Keto During Pregnancy 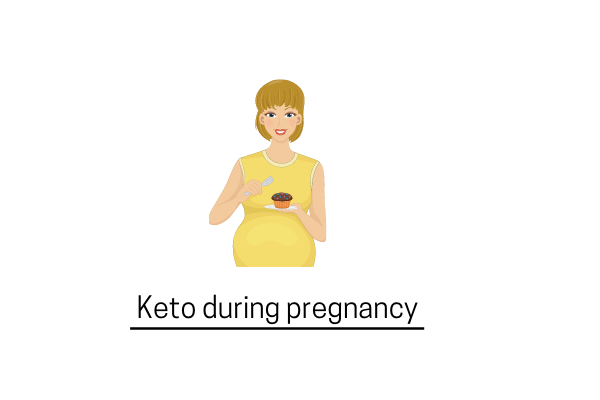 Normally ketogenic diet is considered to be a safe dieting option for most adults and has a number of health benefits. However, the situation can be a bit different for pregnant women, considering their body goes through a lot of changes during pregnancy. Most women have doubts regarding the effects of ketosis on their bodies, and on top of that internet is full of misconceptions about going keto during pregnancy.

It is very important for pregnant women to be sure, that the diet they are having is safe and beneficial for their baby. Read on to know more details on the subject, so that you can make an informed decision about which diet plan to follow during your gestation period.

Getting pregnant in Keto

Ketosis may actually be helpful for getting pregnant. For example, it’s been recommended for women with the polycystic ovarian syndrome (PCOS), who have struggled with getting pregnant (a common symptom of PCOS). In a pilot study on PCOS, two of the women in the study became pregnant even though they had previously dealt with infertility.

In addition, just as a well-planned ketogenic diet is safe for the average person, it’s also safe for women who are trying to get pregnant, especially if she was eating high-carb or Standard American Diet foods before switching to low-carb ketogenic and improving her health.

So with that, the next question becomes, “is it safe to continue ketosis throughout the pregnancy?” While ketosis can be helpful for getting pregnant, the rules are a little different during pregnancy.

We should note here that ketosis is a natural part of being human. For example, between the time we eat dinner and wake up to have our first meal, the body is in a fasting state (think about it: our traditional first meal of the day is literally called breakfast). This is true for everyone including pregnant women.

Most pregnant women suffer from morning sickness, at least at the beginning of their pregnancy. Between that, nausea, low appetite and food aversions, it’s not uncommon for eating to be sporadic and often in low amounts, at least during the early stages of pregnancy. This will naturally occur taking pregnant women temporarily in and out of ketosis.

Also Read: 7 ways to give your wife a healthy retreat this women’s day

Additionally, the state of pregnancy may even favor ketosis. That’s because the blood ketone levels in healthy pregnant women after a fast overnight are around three times higher than that of women who aren’t pregnant.

It appears ketosis happens naturally quite often in women who are pregnant, especially in the late-stage pregnancies. The fetus uses ketones before and immediately after birth to make essential fats in the brain during growth. In fact, researchers believe fetuses might even make their own ketones. This could be the reason ketosis is more common in pregnant women during the third trimester.

During the late stage of pregnancy, a woman’s metabolism also switches to a catabolic state (the breaking down of molecules). This means ketosis is happening more often. Note the frequent occurrence of food aversions and nausea experienced by many pregnant women. This alone will naturally reduce the frequency and amount of food intake, which more easily puts you into ketosis.

Although ketosis is natural and safe if done effectively, big changes happen in a woman’s body and extra precautions must be taken during this cycle of life. Here are some things to keep in mind for those who are pregnant, whether in ketosis or not:

While extra considerations definitely must be taken regarding diet during pregnancy, don’t let fear-mongering convince you that a healthy ketogenic diet is damaging—especially compared to the standard diet most people are eating.