Obesity In America- The Biggest Threat To The Country's Future 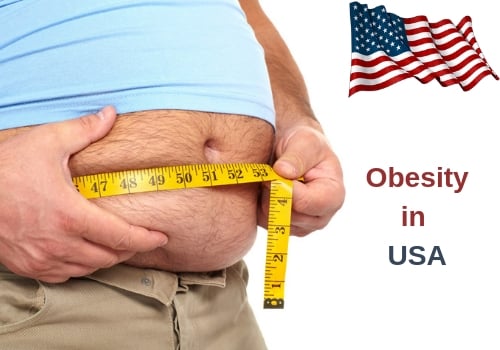 Obesity has drawn the attention of many communities, organizations, and governments and this is because it affects the lives of people negatively. Obesity is defined as the accumulation of fat in the human body and goes beyond the amount of fat required for the human body to function. Body mass index is the primary measure of obesity. Obesity is strongly associated with the development of various chronic diseases such as diabetes mellitus, hypertension, cardiovascular disease, sleep disorders, and many others.

Multiple studies have been conducted to investigate the reason behind the rising rates of patients suffering from obesity. Researchers wanted to know why is obesity higher in the United States as compared to any other developing country?

The evidence they found out suggests that in the last many years, there is no significant change in the calories expended by the people living in the United States, but the calories consumed by them have risen markedly.

One of the studies also suggested that obesity is strongly correlated with access to new food technologies and processed food.

Food technological innovations are considered to be the primary cause of an increased rate of obese people in the United States. Technological innovations such as vacuum packing, deep freezing, improved preservatives, microwaves, and artificial flavors, have made it possible for the food manufacturers to cook centrally and make it reach the customers for rapid consumption. These foods are often high in calories as compared to the food that is cooked at home. There are many points that can explain the role of new food technologies and processed food in increasing the risk of obesity in people in the United States. Some of the points include:

In the United States, the prevalence of obesity among children ages 6–11 years has increased at a very high rate.

There is no doubt in saying that childhood obesity is highly associated with increasing adult obesity. Obese children are more likely to become obese adults.

Fast food is a common subject that is associated with obesity. Children consuming fast food meals have higher calorie intake with low nutritional contents as compared to those who do not consume fast food or limit fast food. Sweet beverages are also a source of high-calorie intake. Several studies have found a relationship between obesity and the consumption of soft drinks or any other sweet beverage. Consumption of sugar added beverages can lead to an increase in the body mass index of an individual. Reduction in the intake of fast food and sweetened items is an effective way to avoid obesity. Intake of nutritional food is recommended.

Genetics is also known to play a big role in the development of obesity.  There are many people who have a higher susceptibility to weight gain.