Do You Have Protein Deficiency? Recognize The Hidden Signs!

Protein is a vital macronutrient found in various animal and plant-based foods. The body requires protein to develop and repair body tissues, including skin, muscles, hair, and nails. Proteins also act as a cornerstone for hormones and enzymes in the body. Proteins are made up of amino acids. There are 22 types of amino acids, although the body cannot produce nine of them, and so we should get them through diet. These nine are also called essential amino acids. The rest 13 amino acids, called non-essential, can be produced in the body and you don't need to rely on diet to get adequate amounts of them.

Some many signs and symptoms may provide a clue that you’re not getting enough protein. Read the complete article to know some of the common signs of protein deficiency. 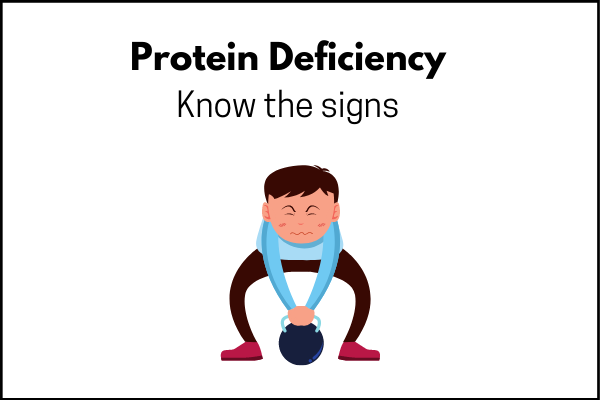 What Is Protein Deficiency?

If you don’t consume enough protein through diet, you may have a protein deficiency. Although rare in western countries, protein deficiency affects about one billion people all over the world, specifically in developing countries.

Consuming sufficient amounts of protein is essential to maintain proper body functioning. If you don’t get adequate protein for a considerable time, it may cause several health issues, including weakness, muscle loss, or impaired immune function.

In severe cases, protein deficiency may bring about a medical condition called Kwashiorkor. Kwashiorkor is a protein deficiency disease that is generally observed in small children residing in developing countries that are affected by famine. This particular disease caused by the deficiency of protein is characterized by swelling of the extremities and abdominal distension. If left untreated, it may also lead to severe complications, including shock, permanent physical and mental disabilities, and even death.

Our muscles are largely composed of protein, and that’s the reason why our bodies start losing muscle mass when they are deficient in this vital nutrient. In fact, this is one among the initial signs of inadequate protein intake.

Like muscles, bones are also at significant risk. When you do not consume enough protein, your bones become very weak, and thus you are more susceptible to have fractures.

Experimental analysis in postmenopausal women discovered that a higher protein consumption was linked to a reduced risk of hip fractures. The most significant intake was associated with a 69% lesser risk, and animal-source protein showed up to have the maximum benefits.

Another research in postmenopausal women with recent hip fractures depicted that taking 20 grams of protein supplements each day for half a year decelerated bone loss by 2.3%.

Adequate protein uptake may keep you fuller for an extended period, thus avoiding cravings and hunger pangs. Nevertheless, lower protein uptake does just the opposite; it leaves you half-starved, which results in higher calorie intake.

This is another common symptom of protein deficiency in which fat accumulates at the liver. If left untreated, the condition may lead to fatty liver disease, which causes liver inflammation, scarring or failure.

Studies suggest that fatty liver is more common in people who consume excessive alcohol or those who are obese. Scientists have not yet discovered the reason why it happens in the case of protein deficiency. It is believed that the abnormal synthesis of lipoprotein (fat transporting proteins) may be responsible for causing fatty liver.

Protein not only helps maintain bone and muscle mass but also is required for body growth. Hence, insufficiency of this particular nutrient may be harmful to children whose bodies need adequate amounts of it regularly. Research shows that there is a strong link between inadequate protein intake and stunted growth.

When you are protein deficient, you become prone to several infections. It happens because your immune system gets weaker and so the severity of conditions also increases.

Studies suggest that even the slightest deficiency of protein in the body can impair your immune system.

Not Getting Results From workout

Some people may feel that they are spending a lot of time in the gym but are unable to achieve desired results. It can be an indication that you are not getting adequate levels of protein. A low-protein diet may cause muscle wasting, fat gain and fatigue. Moreover, not only do you require protein to develop more muscle mass, but protein is also crucial to keeping energy levels high so that you can acquire maximum benefits from your workout sessions.

Your Periods Are Irregular

Polycystic ovarian syndrome (PCOS) is one of the most common causes of irregular periods. PCOS is a condition marked by infertility, hormonal imbalances, or cysts over the ovaries. Researchers have found that a high carb/ low protein diet can interrupt your hormone levels and contribute to insulin resistance, which further elevates your risk for PCOS.

True protein deficiency is rare in developed countries. However, reduced protein intake over time may cause you to develop some of the symptoms mentioned above. If you observe any of the symptoms, consult a healthcare specialist and take a protein deficiency test to confirm the diagnosis. Deficiency of protein can be dangerous or even life-threatening, so don’t overlook the importance of treatment.