Covid-19 Is The Beginning, Next Challenge Is Water Borne Diseases

Covid-19 Is The Beginning, Next Challenge Is Water Borne Diseases

The United States of America has the safest drinking water system in the entire world. Still, according to the Center for Disease Control and Prevention, 4.32 million cases of Acute Gastrointestinal Illness(AGI) occur every year because of the public drinking water systems.

But because of the safest drinking water arrangement in the United States, the estimation, as mentioned earlier alone, cannot contribute to the waterborne diseases statistic.

As per the data, the frequency of the disease's occurrence from all water exposures is likely higher, but the overall prevalence of illness caused due to water borne diseases is unknown. 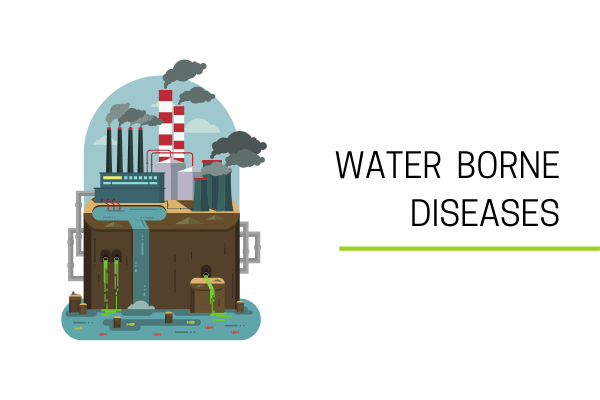 A recent study of the Environmental Protection Agency says, in the United States, almost half of the rivers and streams and more than one-third of the lakes are polluted. They are polluted in such a way that people cannot even swim, drink, or go fishing.

When it comes to overseas, the water bodies are polluted in such a way that 2 billion people consume contaminated drinking water due to feces. This can transmit some of the most common water-borne diseases, such as diarrhea, Cholera, dysentery, typhoid, and polio. Such contaminated water can cause 485,000 diarrhoeal deaths every year.

As per the WHO estimation, by the year 2025, half of the world’s population will be living in water-stressed areas. We can say that water-borne diseases are the future of the pandemic, the same as COVID-19.

What Are Water Borne Diseases?

The diseases that cause illness either by the microscopic organisms, such as viruses and bacteria, or feces are called water-borne diseases. Contaminated water and poor sanitation can cause the most common examples of waterborne diseases, such as diarrhea, Cholera, dysentery, typhoid, and polio.

Some common water-borne diseases that can deteriorate your health are discussed below. Learn to prevent them.

What Are The Most Common Water Borne Diseases?

Waterborne diseases can cause symptoms that are unpleasant to the human body and mind. Some  diseases can be treated very quickly, but some require severe medical treatment and may be fatal. Here are some of them, such as:-

1. Cholera: Cholera is a bacterial disease that usually spreads through contaminated water and can severely result in diarrhea and dehydration. It can be fatal within hours or days if left untreated, even in healthy people. But only one in ten people infected with Cholera will develop life-threatening symptoms, such as:-

2. Malaria: It is a mosquito-borne infectious disease, but the mosquitoes that cause Malaria from their bite comes from contaminated water bodies or stagnant water. These are the breeding areas of these harmful parasites. Some of the most common symptoms of malaria are as follows:-

Also Read: 10 Diseases To Watch Out During Climate Change

3. Typhoid: Salmonella typhi bacteria is responsible for the cause of Typhoid. It gets transmitted to humans via contaminated water. Proper medical attention is needed in order to cure and prevent typhoid. The typhoid symptoms vary from mild to severe and usually begin to experience from 6 to 30 days after the exposure. Here are some of the common symptoms of typhoid, such as:-

4. Amoebiasis: It is an infection, also known as amoebic dysentery, which is caused by any of the Entamoeba group's amoebae. The organism that causes amoebiasis gets transmitted either through cysts in food or through contaminated water. It can cause mild, severe, or no symptom, such as:-

Humans are occupying lands for their own purpose, which ruins the wildlife on land and disturbing the balance between humans and nature. This imbalance can negatively affect both humans and nature. You must have heard, what goes around comes around; the same goes with waste.

With the outbreak of COVID-19, humans must have realized the consequences of disturbing the natural cycle; the same is happening with marine wildlife. The waste we humans discharge in the water bodies comes back to us in some form or the other, such as fish consuming the waste.

However, it is very important to understand why the waterborne diseases are considered the upcoming pandemic and to take the necessary preventive measures.