6 Unusual Skin Diseases That You Should Know About 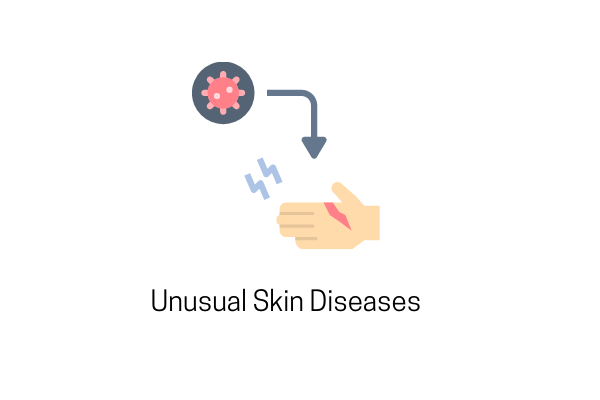 The medical field is vast and new complications break out every day that were previously unknown to humans. The most recent example is the coronavirus. Just like any other disease, skin diseases also can be really baffling to medical professionals sometimes. There are plenty of people throughout the world living with unusual skin diseases that are puzzling. Here we have compiled a list of 6 unusual skin diseases-

Tungiasis is a skin disease which is caused by infection with the Tunga penetrans. Tunga penetrans is a parasitic insect found in most tropical and subtropical climates. It is known to be the smallest flea measuring 1 mm. It causes a condition in which a person notices skin inflammation, severe pain, itching and lesion at the site of infection. Tungiasis is characterized by the black dots at the center of a swollen red lesion, surrounded by a white halo. People who suffer from this disease require proper treatment to avoid any secondary infection that can lead to serious medical issues.

Keloid disorder is the formation of a thick scar that grows much larger than the wound that causes a scar. The size and the shape of keloid vary from person to person. Overproduction of collagen fibers and fibroblast hyperplasia are known to the causes of this skin disease. Normally, a keloid scar is gentle and kind but sometimes it causes severe itchiness and pain. It can develop in any part of the body and it can be due to an insect bite, burn, scratching, pimple or any other skin problem. In Fact, it can also appear on the body piercing and earlobes and arms are the most common spot.

Elephantiasis is a rare skin disease that is caused by parasitic worms. It is also known as lymphatic filariasis. Under this condition, people notice severe swelling on the legs, arms, breasts or genitals. The affected skin can thicken and looks something likes an elephant’s skin. This skin disease spreads by the bite of mosquitoes and the three types of worms that are known to be the major cause of this disease include, wuchereria bancrofti, brugia malayi, and brugia timori. Wuchereria bancrofti is said to be the most common cause of this disease.  These worms damage the lymphatic system which leads to a condition of elephantiasis.

Gangrene is a skin disease in which the person notices a change in skin color to red or black, pain, swelling, skin breakdown, numbness, etc.. Death of the body tissue due to the lack of blood supply causes this disease. It is highly associated with diabetes and long term smoking and underlying infection. Based on the symptoms of gangrene, it is classified into five types i.e dry gangrene, wet gangrene, gas gangrene, internal gangrene, and necrotizing fasciitis. Treatment of gangrene includes the surgical removal of all the dead tissues. Sometimes hyperbaric oxygen therapy is also useful.

Blisters is a skin disease in which small pockets of body fluid appear within the upper layer of the skin. Mostly it occurs when the skin is damaged by friction, burn, infection, freezing, etc. It should be noted that the blisters should not be popped as it can lead to other problems. The effects of blisters can vary from person to person, it depends on the cause of the blister. To one person it might hurt a lot and to another, it might hurt little.