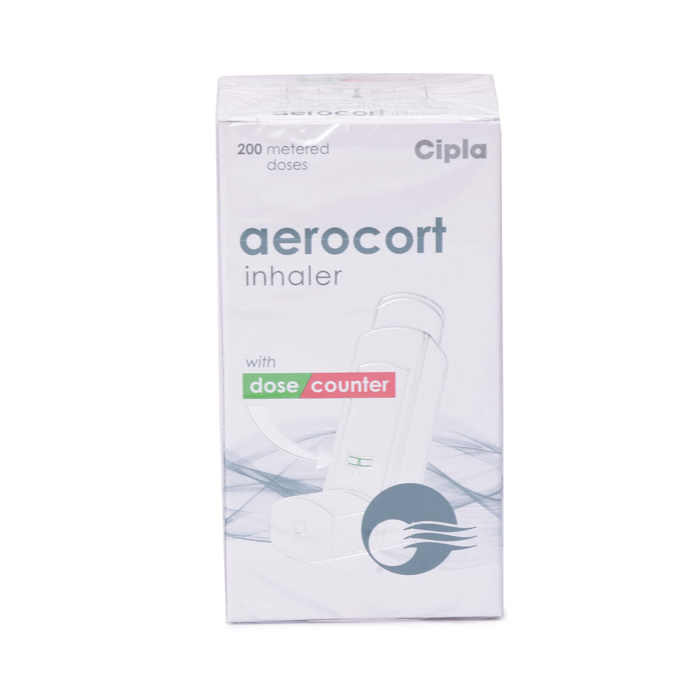 Aerocort Inhaler is a brand of Cipla and manufactured by same in India. It is used for treating Asthma and other respiratory diseases.

Aerocort Inhaler is a combination drug of two main active ingredients, i.e., Beclomethasone dipropionate and Levosalbutamol. The combination of the two drugs is an effective medicine to treat respiratory complications and mainly asthma in the patients.

Aerocort Inhaler is manufactured by Cipla in India. Cipla Limited is an Indian multinational pharmaceutical and biotechnology company. Incorporated in 1935, Cipla has become one of the top pharmaceutical companies in India which uses technology and innovation to meet the everyday medicinal needs of the people.

Strength and Dosage of Aerocort Inhaler

Strength of two ingredients in Aerocort inhaler is,

Other ingredients are quantity sufficient which is written as q.s.

Uses of Beclomethasone dipropionate, levosalbutamol, the salt in Aerocort Inhaler

How to take Aerocort Inhaler?

How long should Aerocort Inhaler be continued?

Do as directed by your physician. The inhaler comes under prescription medicine. Thus, continue it till your physician prescribes you to.

The dose is recommended by your physician. However, if you have missed the dose, take it as soon as you remember. However, it should be missed if the dose for next duration is nearby.

Drug Interactions for beclomethasone dipropionate and Levosalbutamol or Aerocort Inhaler

Around 60 plus drug interactions have been reported with Beclomethasone dipropionate. It is known to interact with Aspirin, Combivent, Cymbalta, Montelukast, salmeterol etc.

When NOT to take Aerocort Inhaler

Avoid Inhaler use if you are allergic to any of the constituents of the inhaler. Do not use it without physician advice. Avoid taking it for acute symptoms.

Side effects of Aerocort inhaler

Side effects of Aerocort inhaler is depended upon patient to patient. However, the side effects which may result in are headache, drying of mouth or nose, etc.

Overdose side effects of Aerocort Inhaler

Overdose shall not happen as it is completely prescription medicine. However, if overdose happens the side effects are tachycardia, arrhythmias, nervousness, headache, tremor, dry mouth, palpitations, nausea, dizziness, fatigue, malaise, cardiac arrest and sleeplessness.

Reviews 1
5 out of 5 (1 Reviews)
5 star 100%
4 star 0%
3 star 0%
2 star 0%
1 star 0%
1 customer reviews (see all reviews)
Disclaimer: The content on this page is meant for informational purposes and is not, under any circumstances, supposed to be treated as a substitute for any medical advice, diagnosis, or treatment. For any questions that you may have regarding a medical condition, it is advised to consult your physician or seek help from a qualified health provider before self-medicating. In case you have any concerns regarding the content on our website, please write to us at [email protected]