As low as $29.16
In stock
SKU
CMS5573
Talk to Experts
Availability: IN STOCK SKU: CMS5573
Vitality 25 Mg tablets contain tadalafil which is a PDE Inhibitor that helps in the treatment of erectile dysfunction. Exclusively available on CheapMedicineShop.
Skip to the end of the images gallery 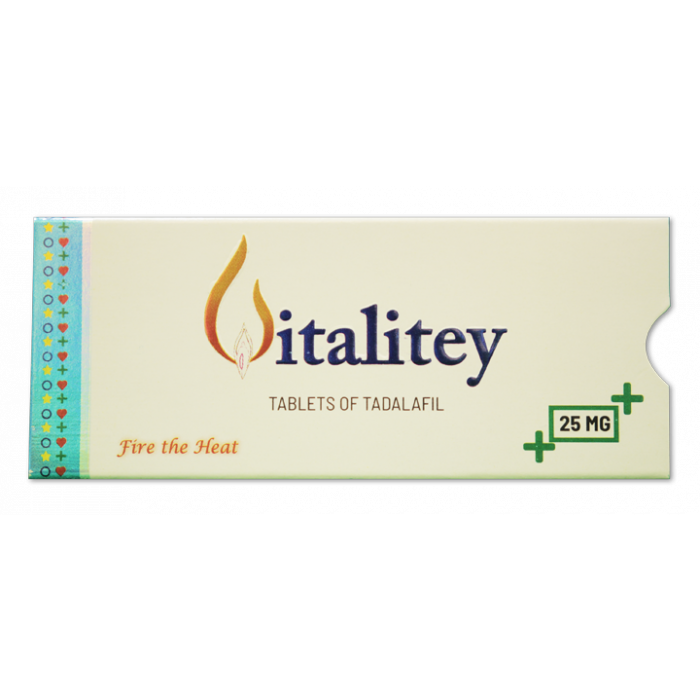 Sexual problems such as Erectile Dysfunction (ED) are common in men.

ED is the inability to achieve or maintain an erection during intercourse.

It helps men to achieve/hold an erection during sexual intercourse.

How Does Vitalitey 25 Mg Work?

Tadalafil is the active component of Vitalitey 25 mg.

It controls the action of the Phosphodiesterase Type 5 (PDE5) enzyme in the penis.

This PDE5 is in charge of the penis becoming flat following ejaculation.

Hence, it maintains the blood flow in the region, enabling an erection.

Vitalitey is available in various strengths, doses, and types.

One should strictly adhere to their doctor's prescription.

Following the guidelines carefully shall overcome any overdosage.

Vitalitey 25mg is best effective when taken about an hour before involving in sexual activity.

You should not consume additional doses than instructed by your physician.

Tadalafil is the primary salt of Vitalitey.

This variant of Vitalitey constitutes 25 mg of Tadalafil.

It also comes in another strength as Vitalitey 50 mg.

Vitalitey is a prescription drug, and adhering to the dosage will prevent overdosage.

However, taking too much Vitality 25mg (Tadalafil) can make breathing difficult or cause fainting.

In such a case, call for immediate medical aid.

What If You Skip a Dose?

Taking only a single pill within 24 hours is advised.

Although in case you miss a dose, you may consume another if the next is due already.

If handled cautiously, Vitalitey 25 mg is not foreseen to cause side effects.

Although, reckless use of Vitalitey 25 may lead to certain concerns, such as:

Vitalitey 25 mg (Tadalafil) may occasionally interact with certain medications like:

Vitalitey 25mg (Tadalafil) may interact with certain diseases such as:

If you have any of the above disorders, consuming Vitalitey 25 mg may have adverse impacts on your health.

One should store Vitalitey 25 mg at a cool, dry, and hygienic place.

Do not freeze the drug.

Keep it away from direct sunlight and children.

Being a prescription drug, you should use Vitalitey 25 mg cautiously.

One should adhere to certain precautions such as:

What should I do If I skipped one dose Vitalitey 25 mg?

If it has been 24 hours already since your last dose, you can take Vitalitey 25 mg anytime.

However, you should adhere to your doctor’s prescription.

No. Vitality 25 mg is a drug to treat Erectile Dysfunction (or Impotency), a men-only disorder.

Its consumption is strictly restricted for women and children.

What foods should I avoid while taking Vitalitey 25 mg?

You should avoid grapefruit in any form when on Vitalitey 25mg prescription.