As low as $21.58
In stock
SKU
CMS616
Talk to Experts
Availability: IN STOCK SKU: CMS616
Buy Rizact 5 Mg this amazing product from our online pharmacy with super fast delivery. It is used to treatment of migraines and relieves pain.
Skip to the end of the images gallery 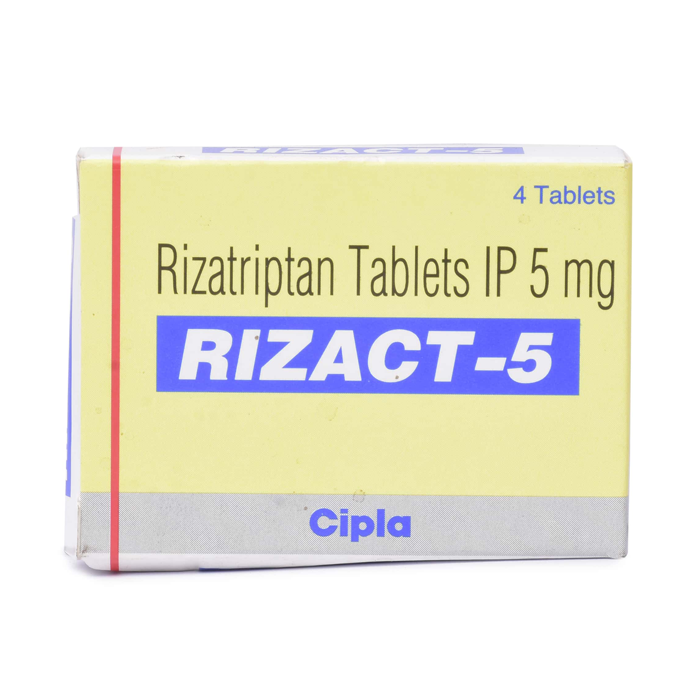 Rizact-5 is a brand manufactured by Cipla and is available at every leading online pharmacy, drugstore and medical supply store. Rizact-5 is a drug having Rizatriptan as an active ingredient in the strength of 5 mg. This drug is used for the treatment of migraine headaches. It can be taken as soon as symptoms of migraine arise or after the attack has begun.

Rizact-5 is manufactured by Cipla in India and is available at every leading online pharmacy, drugstore, and medical supply store.

Uses Of Rizatriptan, The Salt Present In Rizact-5

Rizatriptan is used to treat migraines. It relieves pain by affecting certain nerves in the brain.

The therapeutic efficacy of Rizact is based on the fact that it narrows the blood vessels to stop the brain signal from being sent to the brain and decreases the release of natural substances from brain that results in symptoms of migraine. The active ingredient Rizatriptan is a selective serotonin agonist.

Consult the doctor before taking the right dose as the dosage will depend on the patient’s age, condition and response towards the drug.

How To Take Rizact-5?

Side Effects Of Rizact-5

How Long Should I Continue Taking Rizact-5?

Rizact-5 must be taken when you are feeling the symptoms of Migraine. Its doses must be separated by at least 2 hours and not more than 30 mg should be exceeded in 24 hours time. Take the advice of doctor before taking the medicine as its therapeutic effect varies from patient to patient.

A missed dose should be taken as soon as you remember it. However, if it is almost time for the next dose, skip the missed dose and go back to your regular schedule.  Do not take multiple doses at the same time

Drugs That Interact With Rizact-5

The following substances are known to interact with Rizact 5:

When Not To Take Rizact 5?

Hypersensitivity to Rizact-5 Tablet is a contraindication. It should not be taken if you have the following conditions:

Rizact-5 must be used in the clear indication of migraine. It has to be administered under consultation of a medical practitioner. Its dose varies from person to person so, has to be taken carefully.