As low as $5.70
In stock
SKU
CMS622
Talk to Experts
Availability: IN STOCK SKU: CMS622
Through away the problem of bacterial vaginosis and trichomoniasis with Tiniba 300 Mg. Get it now this amazing product from our online pharmacy.
Skip to the end of the images gallery 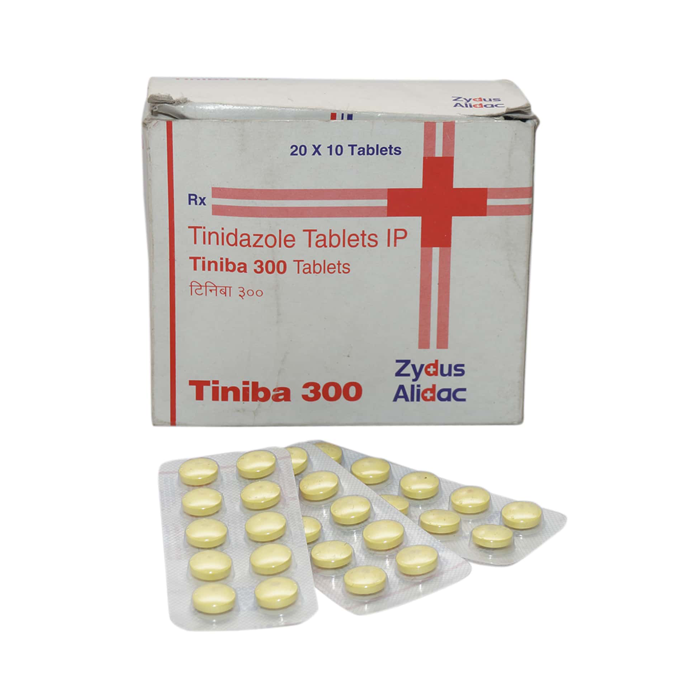 Tiniba-300 is manufactured byZydus Cadila and is available at every leading online pharmacy, drugstore and medical supply store. It comes in the form of tablets in strength of 300 mg. Tiniba-300 is used to treat certain parasitic and bacterial infections. It’s an antiprotozoal and antibiotic. It works by killing sensitive parasites and bacteria.

Tindamax is the drug that is available in the US market equivalent to Tiniba-300.

Uses Of Tinidazole, The Salt In Tiniba-300

Tiniba-300 is an antiprotozoal and antibacterial agent. The nitro group is reduced by cell extracts of Trichomonas. The free nitro-radical generated as a result of this reduction is responsible for the antiprotozoal activity. Chemically reduced tinidazole is shown to release nitrites and cause damage to purified bacterial DNA. Additionally, the drug causes DNA base changes in bacterial cells and DNA strand breakage in mammalian cells.

Tiniba-300 is manufactured by Zydus Cadila in India and is available at every leading online pharmacy, drugstore and medical supply store.

It must be taken as directed by a Physician.

The side effects of Tiniba 100 include:

How Long Should I Continue Taking tiniba 300?

Administration of Tiniba-300 must be continued till the infection is cleared completely. Take the drug regimen as directed by your Physician.

There is no specific antidote for the treatment of overdosage of Tiniba-300. Therefore, treatment should be symptomatic and supportive. Gastric lavage may help. Hemodialysis can be considered because approximately 43% of the amount present in the body is eliminated during a 6-hour hemodialysis session. In case of overdose, you are advised to consult your doctor immediately.

A missed dose should be taken as soon as you remember it. However, if it is almost time for the next dose, skip the missed dose and go back to your regular schedule.  Do not take multiple doses at the same time

Drugs That Interact With Tiniba 300

The following substances are known to interact with Tiniba 300:

Tiniba-300 is used in the treatment of certain bacterial and protozoal infections. Its use and dosage must be taken as directed by the Physician.